2020 Junior Soccer Players of the Year 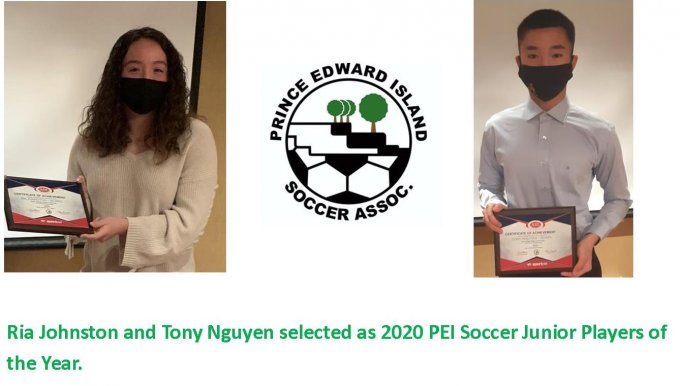 Winsloe Charlottetown Royals FC would like to extend a big congratulations to Ria Johnston and Tony Nguyen for being chosen Junior Soccer Players of the Year by PEI Soccer for the 2020 season!  Ria and Tony were presented with their awards at the PEI Soccer AGM in early March.

Ria and Tony are two exceptional players that grew up with the club and developed their games with Winsloe Charlottetown Royals FC.  Both have participated each winter in the PEI Soccer Provincial Programs and for the last 3 years both have been members of the PEIFC teams that compete in the Nova Scotia soccer league and attend the Club Nationals each fall.

In 2018 Ria and Tony were chosen by PEI Soccer to travel to British Columbia to train at the Vancouver Whitecap's Youth Academy in Vancouver.

We are very proud of Ria and Tony and the hard work they have put into their games.  We look forward to watching them in future years and are excited to see where their soccer journey takes them.

Special thanks to our Sponsors

Manage your identity from the palm of your hand to the top of your desk.